This month we wanted to share some success stories from some of our College Program students.

I hope all is well with you and your family.

I just wanted to update you and let you know that I plan on attending New York University this upcoming fall.

This was one of my top choices for attending college and I would like to thank you for all your hard work and help. I am so grateful for I may not have been accepted without all that you have done.

Thank you again so much and I hope to hear from you soon.

I would like to share some accomplishments of two of my students, Peter and Priya.  Peter graduated 2nd in his high school class of 800. He is a straight “A” student, active in his church, volunteers in a home for the elderly and participates in a teen outreach radio pro- gram. He is now a college freshman at University of Houston and received their Academic Excellence Scholarship for $34,000 and their Tier One Scholarship worth $68,000. In addition, Peter received the Houston Endowment 2013 Jones Scholar award. The total he received was enough to cover all of his college expenses. Peter has been excellent to coach and has been extremely active in scholarship applications.

Priya is a senior in high school with a 3.8 GPA and extremely high SAT scores. For two years, Priya has qualified for the State Lincoln Douglas Debate Tournament, one of the most difficult leagues in the country to qualify for. She has been involved in Indian classical dance for 12 years and has donated over $5,000 from her dancing to her creation; “Artists for Women”, a humanitarian organization that provides microloans, educational materials and medical assistance to women around the world. Two of her organization’s primary projects were The Fistula Project, for medical assistance in fistula surgeries, and Shakti, for education outreach. Priya is dedicated to making a difference in the world and is truly a sincere, modest and creative individual. I have no doubt that she will have an impact on all those that she touches through her selfless contributions.

As students are focusing on their summer fun, they also need to be preparing for their senior year and applying for college and scholarships.  This is a critical time for high school juniors entering their final year of high school.  Many of the scholarship opportunities start to open as early as June 1.  The deadline to apply for some colleges is as early as October.  In order to be prepared to apply to colleges, they need to be evaluating the schools they are considering as well as deciding on their major and looking at the best school for them.  They need to look at what the admission requirements are and try to determine if they qualify before they pay the application fee.  Many times a student will apply to 4 or 5 schools where they barely meet minimum requirements for acceptance. In these cases, even if they do get accepted they do not receive any financial aid from the college.  In order for our coaches to help students embarking on their senior year, it is critical that they start as soon as possible.  While it is never too late to start; time is of the essence.

Also of critical importance is the parents determining how they will fund college as well as which colleges will be the most cost effective while providing a quality education for their child.  All too often, colleges are selected for the wrong reasons and many students ultimately spend 6 years trying to obtain their degree or they get discouraged and drop out. 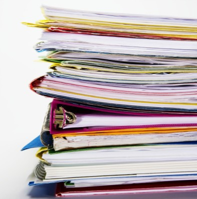 If you’ve got your sights set on an Ivy League degree, get ready to put up a fight because it’s harder than ever to get in.

Six of the eight colleges and universities that make up the Ivy League have lowered their acceptance rates since last year, according to admissions rate data released this week.

Less than 7% of Yale and Columbia University applicants were admitted this year. That acceptance rate was higher than Harvard’s though, which welcomed just 5.9% of freshman hopefuls (a smidge more than they took in 2013). The Cambridge, Mass., college was one of only two Ivy League schools to increase its admissions rate, along with Dartmouth, which admitted 11.5% of applicants, up from 10% last year.

To some students — mostly those who don’t have famous last names or parents with bottomless bank accounts — these numbers might sound too daunting to overcome.

“The perception is that the college admissions process is biased to those who have more money, and I guess it has been for a long time. But I try to alleviate that bias and help give families information they need to compete with anybody,” says Mandee Heller Adler, founder of International College Counselors and author of the new book, “From Public School to the Ivy League.”

Just 31% of publicly educated students earn a bachelor’s degree compared with nearly 60% of their private school peers who get them, according to re- cent study by the National Center for Educational Statistics. On top of that, less than 10% of low-income students even bother to apply to competitive schools at all.

Public school students tend to see what their peers are doing and what their communities have done and that’s what they follow,” Adler says. “It’s just not normal to [aim for the Ivy Leagues].” The Ivy Leagues aren’t the end-all, be-all of higher education in the U.S., and we’d never encourage parents to pressure their kids to pick schools based on pedigree over practicality. But the truth of the matter is when you take money out of the equation, getting into a top school is just like any other competitive sport out there — it’s all about your strategy.

Here are 7 things may not know about getting into top schools:

The sticker price that your dream school has posted on its tuition and fees page doesn’t account for the copious amounts of financial aid most Ivy League schools dole out. What you want to look for is the net price — how much the college costs once you factor in grants and other financial aid.

In the graph below, taken from a 2012 study published by the Brookings Institute, you can see that low-income students (the teal bar) often wind up paying less in net price at highly competitive schools than those that are less selective.

Low-income students pay a lot less at top schools than you might think. In 2012-13, undergraduates enrolled full-time in priva 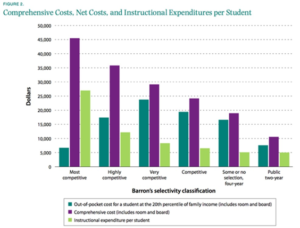 At some schools, if you apply for early admission, you’re basically signing a contract with the school — if they accept you, you have to go there, no matter what it costs or what other offers you’ve gotten. Since middle-income students generally get fewer grants and may not qualify for federal student aid, they’re more likely to need to compare offers from a variety of schools before selecting one.

“I think early decision is an unfair advantage for some [low- and high-income] families who either know they’re going to get aid no matter what, or can afford tuition if not,” Adler says. “Middle-income families might need to apply for scholarships and early decision is a very uncomfortable situation to be in.”

The biggest downfall of college applicants is that they start too late in high school to beef up their grades, extracurricular, and community service activity — key factors for admissions officers, Adler says.

“Private school students more and more are starting college prep in the 8th or 9th grade,” she says. “It’s a process.”

Admissions officers pay close attention not just to grades but the rigor of the student’s course load. It’s not enough to pile on Advanced Placement courses in the 11th or 12th grade. They’re looking for progress over time. “It’s impossible to join a club and become president or vice president when you’re a senior,” she says. “That’s why education on the young level is so important.”

Every college applicant needs a contingency plan, and Adler coaches her students to apply to at least nine different schools: “A few reachers, a few safety schools, and a few in the mid-range.”

Not only does it cover more bases, but you’ll have more bargaining power if you decide to negotiate your financial aid offer with your choice school. Not every school will negotiate (public universities generally have a set limit on how much aid they can offer), but it’s worth a shot.

Adler recommends using a site called the Common Application, a single college application students can fill out and use for hundreds of participating schools (including the likes of Harvard, Yale and 500 others).

Sometimes application and test fees ($35-$80) alone can be cost prohibitive for some families. Ask your high school guidance counselor for a voucher that can save you the cost of taking the SAT or ACT. You can save on application fees by visiting the college yourself. Adler says some admissions offices offer waivers as a “thank you” for an in-person visit or if you send in a recommendation letter from an alum. Just schedule an appointment first and be sure to sign in when you arrive. Most admissions offices keep track of students who visit and it can give you a slight edge on your application.

Colleges are increasingly fact-checking and auditing applications, Adler says. If you’ve lied about participating in a certain club or plagiarized your essays, chances are they’ll find out. And it could wreck your shot at getting in.

Procrastinators tend to take these short cuts more often than others. That’s part of the reason Adler coaches students to start filling out applications in their junior year.

“Some of these schools ask for five essays,” she says. “That’s not something you can do in a weekend.”

Kids are kids, but that doesn’t mean a college won’t withdraw an offer letter if they find something particularly damning on an applicant’s social media profiles. “Most of the college admissions officers are really young actually, and they’re on Facebook and Instagram as much as kids are,” Adler says. “That’s the kind of thing that can torpedo a kid’s application.” There are ways of getting around privacy settings, and it’s not unheard of for classmates to rat out their peers by sending incriminating posts to admissions offices. It has to be clean and nothing can be posted that could be held against them,” Adler says. If all else fails, she recommends using the “Grandparent test”: if it would make your grandparents uncomfortable, it’s probably not appropriate to post.